Senior Spotlight: Gabby Smith, School of the Arts to Spelman College – A Choice to Change the World

Gabby Smith made a choice her sophomore year that baffled many of her friends and the staff of Northwest High School. Even her parents questioned her decision to attend Butler Tech School of the Arts. Not because they didn’t recognize her passion, or appreciate her talent. But because she was happy at Northwest. She was involved, president of her class, member of the National Honor Society, a true Northwest Knight. However, when Gabby visited the School of the Arts, she found a place she felt she belonged.

“I felt at home,” Gabby explained, “and I felt like this type of opportunity may never come again.”

Gabby of course shared her list of activities and leadership roles with Cy Wood, Vocal Instructor, during her interview.

“Cy had me sing a few notes and sing the scales with him at the piano,” Gabby recalls. “But then he asked me if I was ready to pour my leadership into SOA, and I immediately felt a connection and a responsibility to do just that.”

Gabby hit the ground running as she began her junior year as a vocal major and gave not only her talent but her heart to the SOA family. She became involved in several groups on campus and also remained involved with her organizations at Northwest High School.

“It was a lot to take on,” admitted Gabby, “but I wasn’t going to let people believe that I couldn’t carry a heavy load, I can and I did.” 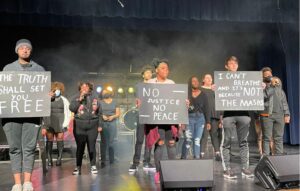 This spring, Gabby organized and produced the Black Excellence Show, a student-led performance that featured African-American artists as well as highlighted the talents of the diverse student body who attend the School of the Arts.

The next step in Gabby’s future required a difficult choice to be made again. With her sights set on majoring in Psychology, Gabby began the college application process and applied to six colleges by the early action dates in the fall of 2020, including Wilberforce University, Central State University, Northern Kentucky University, Kentucky State University, Alabama A & M University, and Spelman College.

“I literally sat back and watched as I received acceptance letters from every college…except Spelman,” said Gabby, recalling the agonizing wait. “I waited and waited for word from Spelman, knowing that I was aiming high but hoping for the best.”

Spelman College is recognized among the top 100 national liberal arts colleges and is the number 1 historically black college and university in the country!

“Then, finally on April 1st, I received my acceptance to Spelman!” 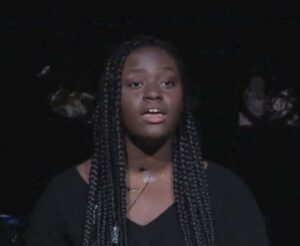 But Gabby still had a choice to make. Despite the honor and prestige of being accepted to such a top-ranked school, Gabby had never visited the campus and was unsure of her decision.

Additionally, Gabby was well aware that the price tag for Spelman had to be considered as well. Although her acceptance to the university had arrived, she was awaiting news on the Codehouse Scholars Initiative, a scholarship program specifically for students entering into one of the select historically black colleges and universities, such as Spelman College.

“We were literally on Spelman’s campus when I received an email from the Codehouse initiative telling me I had been awarded the scholarship! It was a sign, it felt right.”

Gabby ultimately made the choice to accept her offer to attend Spelman College and will move to Atlanta later this fall. She hopes to utilize her degree in psychology someday by opening a private practice where she can specialize in music therapy.

Gabby will undoubtedly continue to make choices, such as her decisions to attend Butler Tech School of the Arts and Spelman College, which will allow her to change the world.